Our laboratory studies the mechanisms of adult neurogenesis and neuronal replacement.  Contrary to the dogma held for over a century, some populations of neurons continue to be produced in juvenile and adult brains.  Basic mechanisms of neural development can be studied in a fully assembled brain, providing key insights into the nature of neural stem cells, mechanisms of neuronal migration, and neural maturation.  Our goals are to understand: 1) How young neurons are generated; 2) How young neurons migrate long distances; 3) How young neurons differentiate and contribute to brain function and possibly brain tumors; 4) Whether similar processes can be used for brain repair is also studied in the lab. 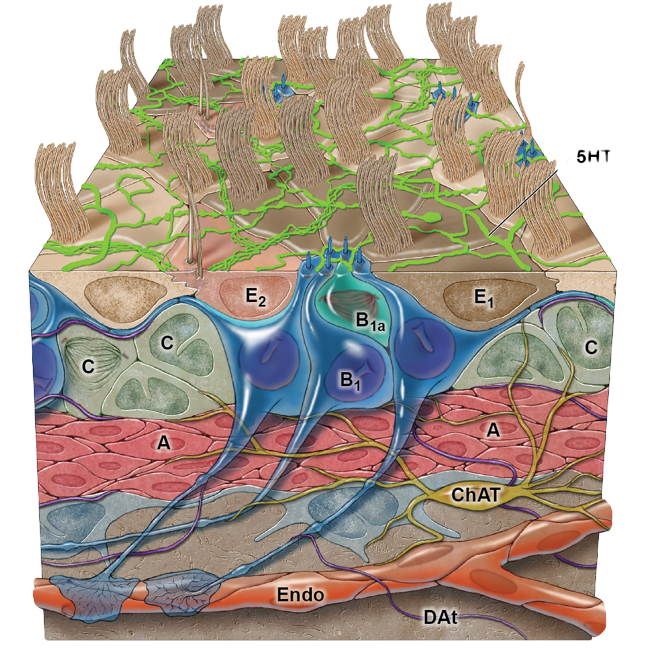 Astroglial B1 cells, V–SVZ NSCs (dark blue), give rise to activated B1 cells (B1a, light blue) that actively divide 10 and 11. Activated B1 cells generate the transit-amplifying C cells (green) which, after three rounds of divisions, give rise to A cells, the migrating neuroblasts [12]. Note that B1 cells contact the ventricle with an apical process. This adult VZ is also populated by ependymal cells, multiciliated cells that together with the apical endings of B1 cells from pinwheel structures on the surface [3]. Coursing along this ventricular surface is a rich network of serotonergic axons (5HT, bright green) [44]. The basal processes of B1 cells have endings on blood vessels. Choline acetyltransferase (ChAT)-positive neurons found in the region have endings in the SVZ (olive brown) [51]. Dopaminergic terminals (DAt, purple) are also observed in this region.  Figure and legend taken from Lim DA, Alvarez-Buylla A. Adult neural stem cells stake their ground. Trends in neurosciences [Internet]. 2014 Oct [cited 2014 Oct 9];37(10):563–571. Available from: http://www.ncbi.nlm.nih.gov/pubmed/25223700 PMID: 25223700

We have identified the neural stem cells (NSCs), intermediate progenitors cells, and lineages for adult neurogenesis in the adult mammalian ventricular-subventricular zone (V-SVZ).  This is the most extensive germinal niche in the adult mammalian brain.  These NSCs integrate information within the niche and also receive axonal input from local and distant sources.  NSCs in the V-SVZ generate large numbers of new neurons that migrate long distances through the complex matrix of the postnatal brain. New neurons then differentiate into local-circuit neurons that become incorporated into the olfactory bulb.  We are studying the properties of adult NSCs, their embryonic origins, and their mode of division. 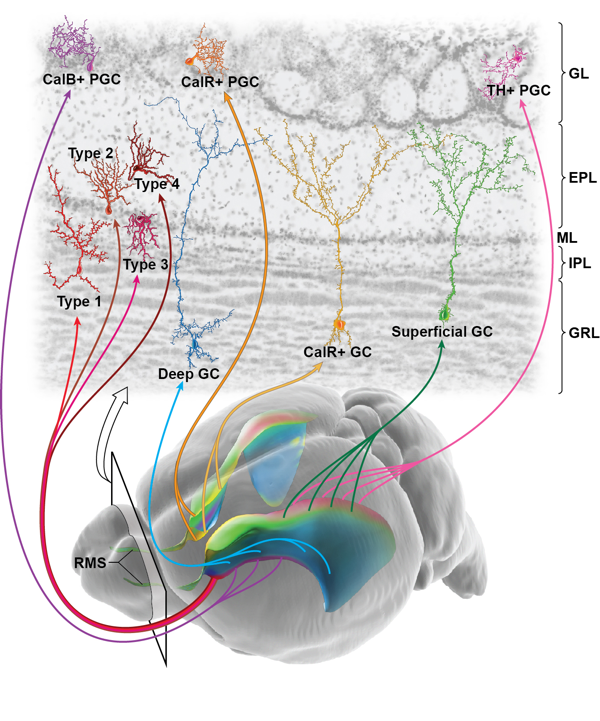 We are also studying the V-SVZ in the human brain.  We found that in infants the V-SVZ contains many migrating young neurons.  Interestingly, in addition to the migration to the olfactory bulb (OB) in young children, new neurons derived from the V-SVZ migrate towards cortex.  We are investigating: 1) The regions of cortex where these new young neurons migrate to; 2) During which period of human postnatal development they contribute new neurons to cortical circuits; and 3) What types of neurons they generate.

Replacement of local circuit neurons (interneurons) is a promising new approach for brain repair; however, we have found that V-SVZ neurogenesis is highly tailored for the production of olfactory bulb neurons.  We are investigating the potential of young neurons derived from the embryonic medial ganglionic eminence (MGE) for brain repair.  The MGE is a major source of inhibitory local circuit neurons for the cerebral cortex.  Unlike, neurons derived from the adult V-SVZ, young MGE neurons can migrate and functional integrate into the adult brain outside of the olfactory bulb.  In collaboration with other laboratories at UCSF, we have found that these cells can induce a new period of plasticity in the visual cortex, can ameliorate seizures in epileptic mice, and can reduce pain thresholds in spinal cord circuits.  We are studying how these cells integrate into adult cortex and which populations of interneurons are responsible for the above therapeutic effects.

The laboratory uses mostly in vivo approaches.  We take advantage of the collaborative environment at UCSF to use multiple levels of analysis to understand the mechanisms of adult neuronal replacement at the molecular, cellular, circuit, and behavior levels.